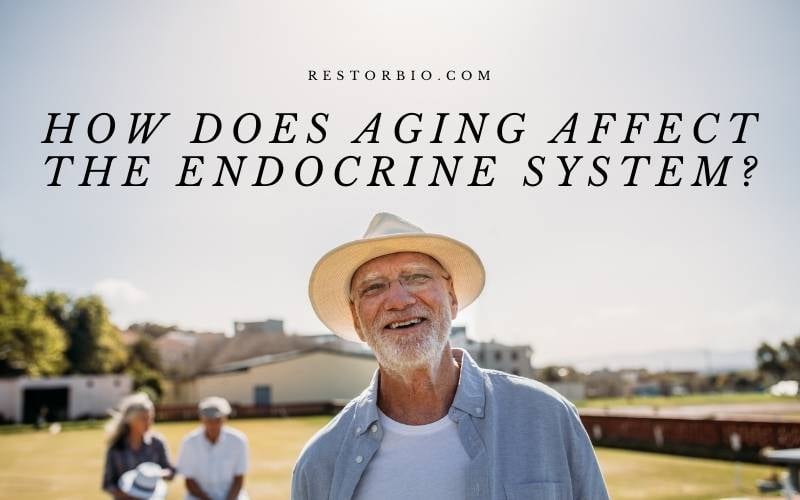 The endocrine system is made up of organs and tissues that produce hormones. Hormones, which are naturally produced chemicals, are released into the bloodstream and then used by other target organs or systems.

Hormones control the target organs. Some organ systems also have their internal control systems, which can be used in place of hormones.

Changes in how our bodies are controlled naturally occur as we age. Some target tissues are less sensitive to certain hormones. You may notice a change in the number of hormones being produced.

Other hormones can control many of the hormone-producing organs. This process is also affected by aging. An example is that an endocrine cell may produce less hormone at older ages or produce it slower. Keep reading resTORbio’s article to know more about How Does Aging Affect The Endocrine System?

As we age, some changes can affect our endocrine system. These changes may alter the secretion and catabolism and the production, secretion, and metabolism of hormones. As we age, the structure and content of the anterior pituitary are affected by vascularization.

This restructuring can affect the gland’s ability to produce hormones. The amount of human growth hormone produced decreases with age. This results in a reduction in muscle mass that is common in the elderly. 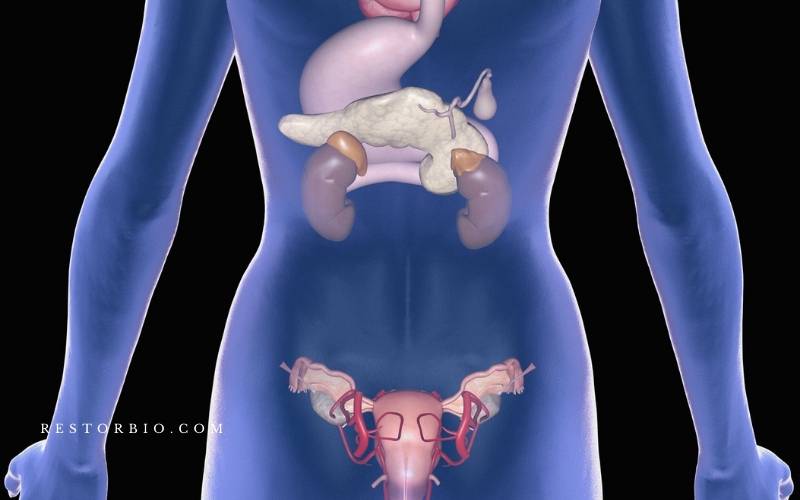 As the body ages, the adrenal glands change. The production of cortisol (and aldosterone) decreases as fibrous tissue grows. It is interesting to note that the secretion and production of norepinephrine and epinephrine are not affected by aging.

Menopause and decline in ovarian function are two well-known examples of how aging can affect an endocrine system. As we age, our ovaries shrink in size and become less sensitive to gonadotropins.

This causes a gradual decrease in estrogen levels and progesterone levels, leading to menopause and the inability to reproduce.

Low estrogen and progesterone levels are associated with certain diseases, including osteoporosis, atherosclerosis, and hyperlipidemia (or abnormal blood lipid levels).

The levels of testosterone also decrease with age. This is called andropause. However, it is less severe than the decline in estrogens in women and more gradual. Sperm production rarely declines until very old age.

This means that while males can continue to have children for many decades longer than their female counterparts, their sperm quality, quantity, and motility are often lower.

Increased levels of parathyroid hormone (and estrogens for women) may lead to osteoporosis. PTH stimulates the demineralization and calcium levels in bones, which can cause an increase in blood calcium. Osteoporosis can be seen in both male and female elderly.

The rate at which blood glucose levels rise with age can also be affected by how they return to normal. A gradual decrease in insulin sensitivity may also lead to an increase in glucose intolerance. Nearly 27 percent of Americans 65 years and older have diabetes.

How Does Aging Affect The Endocrine System?

The endocrine glands are pivotal in both reproduction and development. It seems reasonable to expand the role of the Endocrine System to account for the gradual changes in body structure that accompany aging (senescence).

An endocrine theory of aging was popularized many years ago. However, it is now clear that with some exceptions endocrine function does not significantly change with age.

The most significant change in ovarian function is after menopause when it drops abruptly. There are gradual age-related decreases in the production of melatonin, growth hormone and insulin-like growth factor 1 (IGF-1), and dehydroepiandrosterone (DHEA).

Menopause is the most significant age-related alteration in endocrine function. Granulosa cells and interstitial cells line the egg-containing eggs.

They produce estrogens. As we age, estrogen secretion decreases and the onset of menopause is inevitable. Serum estrogen concentrations drop by at least 80 percent in postmenopausal females.

This causes a decrease in serum estrogen concentrations and increases the secretion of luteinizing and follicle-stimulating hormonal hormones.

These hormones are secreted and absorbed more efficiently in women who are normal postmenopausal. Ovarian function decreases significantly.

It begins around the age of 40 and causes decreased testicular function. Late-onset hypogonadism can cause erectile dysfunction, decreased libido and fatigue, as well as depression. Because symptoms can be subtle, the condition might go unnoticed for years.

The normal physiological decline in testosterone in men results in a decrease of androgen-secreting Leydig cell numbers.

A slight decrease in spermatogenesis often accompanies this. However, men can remain fertile for many years. There is also a slight increase in gonadotropin production.

The cause of the decrease in dehydroepiandrosterone is not known. Although aldosterone secretion and plasma renin activity decrease slightly, healthy older people can maintain normal fluid balances.

As we age, growth hormone secretion and serum levels of IGF-1 decrease. Older adults have mild deficiencies in growth hormone and IGF-1 compared to young adults. IGF-1 deficiency could explain the decline in muscle mass and increase in fat mass in older adults.

It is not clear whether growth hormone treatment can reverse these changes. The treatment also has potential side effects such as increased blood pressure or fluid retention.

At around 30 years old, peak bone density and mass occur. After that, bone mass decreases slowly with age. In women’s first years after menopause, the rate of decline accelerates. However, the loss continues indefinitely.

This is what contributes to the increase in fractures in older people, particularly in women. An increased chance of falling is a key factor in increasing the risk of fractures.

This is due to a decrease in muscle strength and coordination. Smoking, age, genetic susceptibility, and inactivity are all risk factors for bone loss in seniors.

Older people are more likely to experience decreased thirst when dehydrated and higher basal serum vasopressin levels. Their kidneys are less responsive to vasopressin than those of younger people.

These changes can increase the likelihood of dehydration. If water is not available, an increase in vasopressin production may increase water retention and decrease serum salt concentrations. This could lead to hyponatremia.

Although the insulin secretion increases are noticeable, they are not enough to maintain blood glucose levels in the same range as healthy young adults. It is still unclear whether these changes are normal or merely adaptations to the aging process.

Age-Related Dysfunctions of the Endocrine System

Controlling blood sugar is an important example of negative feedback.

An increase in blood glucose can stimulate the production of insulin by beta cells in your pancreas.

When glucose levels fall below a threshold, insulin production is stopped by the beta cells.

Basal insulin concentrations fluctuate in blood after meals due to the synchronization between insulin release among beta cells.

These oscillations are clinically significant because they help to maintain the sensitivity of insulin receptors within target cells. This is what causes insulin resistance. Failure of the negative feedback mechanism may lead to high blood glucose levels that can have many negative health consequences.

Let’s look closer at diabetes. We will be focusing on diabetes type 1 as well as type 2. Too little insulin, too much insulin resistance, or both can all lead to diabetes.

The pancreatic beta cells sense glucose levels and release insulin to counter them. Daily insulin injections are required in this condition.

People who have lost their pancreas are also affected. Diabetes type 1 can be present even after the pancreas is removed as a result of cancer.

Type 2 Diabetes is much more common than type 1. This type of diabetes accounts for most cases. This disease is most common in adults, although it is becoming more common in young people.

Type 2 diabetes is characterized by insulin resistance. The pancreas still produces insulin, but the tissues don’t respond to insulin at normal levels.

The pancreas will gradually decrease the amount of insulin it produces over time, but this is not what causes the disease.

Although type 2 diabetes is serious, many people don’t know they have it. Insulin resistance is becoming more common as a result of obesity and inactivity.

Hyperthyroidism, an abnormally high blood level of thyroid hormones, can be caused by thyroid cancer or a pituitary tumor. Graves’ disease is a condition where antibodies stimulate the thyroid gland’s follicle cells.

Hyperthyroidism may cause an increase in metabolic rate, increased body heat and sweating, and weight loss. Exophthalmos is when the eyes bulge due to antibodies that cause inflammation in the orbits’ soft tissues. A person could also develop goiter.

Seniors do not have to respond to stress differently. All ages can experience stress. The physiological changes that lead to aging can be very stressful. People’s responses to stress may change as they age.

What happens inside our bodies when we feel stress? The physiological mechanisms of stress are extremely complex, but they generally involve the work of two systems the sympathetic nervous system and the hypothalamic-pituitary-adrenal (HPA) axis.

The sympathetic nervous system activates adrenaline release from the adrenal glands when a person perceives something stressful. These hormones trigger the fight-or-flight response to stress. This includes an increased heart rate and respiration.

The HPA axis becomes active at the same time. Although it is predominantly endocrine, it functions much slower than the sympathetic nervous system. In response to stress, the hypothalamus (one of the limbic structures in the brain) releases corticotrophin-releasing factor, a hormone that causes the pituitary gland to release adrenocorticotropic hormone (ACTH).

The ACTH activates the adrenal glands, causing them to release a variety of hormones into their bloodstream. One important one is cortisol. This hormone can have a profound effect on almost every organ in the body.

Cortisol, commonly known as a “stress hormone”, helps us get that extra energy when facing a stressor. It prepares us to fight or run. But, cortisol levels that are elevated for long periods can weaken the immune system.

Evidence suggests that due to the cumulative stresses accompanying aging, the hypothalamic-pituitary-adrenal axis tends to be hyperactive in older people.

How To Help Aging Parents From Afar? Top Full Guide 2021

How Does Aging Affect The Integumentary System? 2021

How To Keep Hands From Aging? Top Full Guide 2021